Today was Productivity's Annual Chili Cookoff.  An event that has captured the attention of those of us at Productivity for several years, I do not know how many.  (Kacie Vinton estimated 5th annual - but it seems to me this has been a longer tradition than that.)  Thanks to Kacie Vinton and Ashley Wersal for their hard work in organizing this extravaganza of spicy meats and beans!  And to all who contributed!  There was more than enough chili, cornbread, yummy bars , chips - and stuff to wash it all down for everyone.

There were 16 Chilis to choose from, all made by people at Productivity.  Each secret concoction in a crock pot for tasting.  The maker of each of these potions was kept a secret for voting purposes. 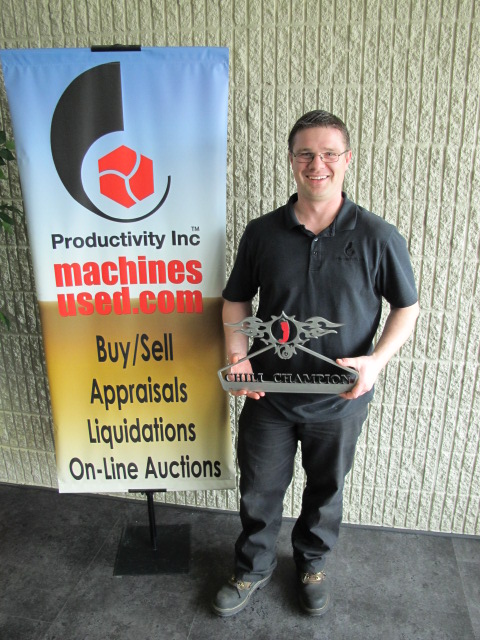 Machinesused.com had two entries, last years runner-up Kiel Beloy was looking for redemption, and victory was the only option.  Last year Mike Schade from Productivity's Tooling Department ran away with the trophy, and had entered again this year to defend his title.  But the plucky young man from Coon Rapids, MN had other plans, and produced a secret formula chili that won the hearts and votes of Productivity tasters.  When asked to reveal his secret ingredient, "Love.."  Well that, and ignoring any advice from Machinesused.com's other entrant, Chris Archer - his chili received no favorable votes in this years competition.  Chili cookoff veterans may remember that Chris' father Andy Archer is a multiple Chili Cookoff Champion - Andy was noticeably absent at this years competition.